The first consideration, of course, is appearance. If you are buying this gun as a collector, this is paramount. Most of the suggestions that follow will not be applicable. If you are looking for a "bullseye" or target grade pistol, here are some important things to consider. For a range or target weapon, do not rule out any of the numerous M1911 style copies of foreign and domestic manufacture. 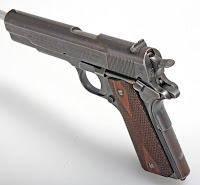 ALL GOOD GUNS ARE NOT MADE BY COLT

Some of these are fully equal to Colt in quality and many Colt repair parts may fit, such as the sears, disconnectors and springs. Even hammers, slide latches and barrels may be interchangeable. This makes them easy and practical to both accurize and repair. There is certainly a pride in owning a genuine Colt but the Colt Mystique does not help downrange and an equally accurate pistol may be found in other makes for half the price.

STUDY ALL MAKES FOR STYLE AND FEEL

I suggest looking at Colt pistols along with others even if you have decided a genuine Colt is not necessary for you. There is a certain feel and balance to the genuine article that is not always duplicated by other manufacturers.

DON'T WASTE YOUR TIME ON A "PIG IN A POKE"
If you are ready now, let's start with the first nice looking pistol you find. Ask the seller if he will dismantle it for your inspection. If you are seriously considering spending several hundred dollars he should not mind letting you inspect the interior. If not, move on and look for another.

CHECK FOR A LOOSE BARREL
If he agrees, first pull the slide back slightly from the locked-up "in battery" position. In a 1911-A1 or Series 80 pull the slide back a very small amount, just enough to clear the barrel hood from the boltface guides. Grasp the barrel with your fingers and try to turn it. If it turns only slightly or not at all, this is good. If it is loose, and floppy, this is probably bad news. Very likely the under-barrel lug fits loosely in the slot in the frame, and there is a lot of link and pin wear. This will not help in guiding a precise and repeatable lock up into battery. This repeat- able lock-up is the very essence of accuracy in any semi-auto with a tilt- ing barrel Browning type lockup. Unless you are able to afford the cost of having a new Match barrel and bushing fitted this alone may be enough to disqualify this gun immediately. This test is not usually applicable to a Series 70 unless the barrel bushing has been replaced with one of the 1911A1/Series 80 type. The Series 70 bushing will hold the barrel too tight to allow it to be moved easily with the fingers for this test but it does not invalidate the need to check barrel and frame measurements.

CHECK BARREL AND FRAME MEASUREMENTS
Now is when you let the seller dismantle the gun. You should have a dial caliper to measure the barrel lug slot in the frame. The design width is .365 inch just over the Latch pin hole. Measure the barrel lug at the link pin. The design width is .360 inch, leaving no more than .005 inch clear- ance as desirable. This clearance plus the link and link-pin wear is what you felt in the earlier test, when you tried to rotate the barrel. The fit here is very important, as this guides the barrel into the boltface at lockup. This measurement will tell you where the problem is if the barrel was loose in the previous test. A new Match barrel can be fitted for some additional expense but a loose frame is harder and more expensive to fix.

LOOK FOR A MATCH BARREL AND BUSHING
If you are checking out a Colt Gold Cup or other "accurized" gun it may have a "National Match barrel", marked N.M. This type barrel will also be slightly smaller in diameter from a point one half to three quarters of an inch behind the muzzle back towards the breech. This barrel allows using a tightly fitted National Match bushing, marked N.M. Any Gold Cup without a N. M. barrel and fitted N. M. bushing is a "Gold Cup" in engraving only. It is possible to fit a Match barrel to a Government model, as the slides are essentially the same. There are other types and schemes for barrels and bushings or "bull" barrels, most are of doubtful merit. The standard types will serve well enough.

LOOK FOR A WELL FITTED BARREL
For the rest of your examination the gun should be reassembled WITHOUT the recoil spring and spring guides. Be sure the bushing is in and rotated correctly. Now work the action slowly and observe the barrel closely as the hood slides into the guides. It should slide in very smoothly without any rotating or clashing with either side. The tighter it fits and still goes in smoothly, the better. Any rotary or sideways movement is definitely undesirable. While holding the action shut try to estimate the wear on the barrel bushing by pushing the end of the barrel around with your thumb. Any movement there should be barely detectable. If you have not yet ruled out this particular pistol try to determine whether the barrel is being pushed up by the link when fully closed or whether it is properly cammed up by the bottom lug and the latchpin. While holding the action shut press down on the barrel in the slide opening to see if it gives any. There should be no movement. If the slide moves back, this may indicate that the barrel is being lifted and held in lockup by the link. The operating idea here is that the link should only serve to lift the barrel high enough to slide up onto the latchpin when going into battery and the link should never be under a severe strain, either while opening or locked up in battery.

CHECK THE LINK LENGTH AND BARREL STOP IN RECOIL
Move the slide to takedown position and pop the latchpin out slightly from the detent and swing it down towards the trigger. Now pull the slide all the way open, hold it in this position and see if the latchpin is free and loose while pushing hard against the muzzle. It should be loose. If it isn't, perhaps the link is too short for the rear of the underbarrel lug to come up against the stop in the frame. If the barrel does not hit the stop before the link is taken up the barrel will swing on the link and slam down on the frame. This may stretch and possibly even break the link with "hot"or +P ammo. A broken link could be a disaster on the very next round. The bottom edge of the barrel should stop just short of the loading ramp in the magazine well and not obstruct cartridges moving up the loading ramp. Move the slide back to takedown position and replace the slide latch.

BARREL LUGS TO BOLTFACE CLEARANCE IS FELT AS ENDPLAY
Now is when we test for barrel lug fit as endplay. Pull the slide back from lock-up VERY SLIGHTLY so that pressure is off the barrel to check for endplay. What we need to know about here is the slack in the locking lugs with the hood against the boltface. It may be necessary to wedge something into the muzzle to grasp, like a thick plastic pen, since the barrel will not protrude enough to grasp and move in and out. There should be no or almost no endplay in a Match barrel and a mimimum, not more than .010" in a standard barrel. This is not an easy check to learn at first, it will be necessary to try several pistols to develop a "feel" for slack and wear in the locking lugs. Excess endplay is highly undesirable since not only will it increase the headspace, it will also allow a takeup "slap" which is very hard on the locking lugs with hot or +p loads. Excess headspace might also cause erratic ignition by firing cartridges held by the extractor instead of being properly seated. "Firing on the extractor" is definitely not desirable in a target pistol. This end play test will not be easily applied to a Series 70 pistol unless the finger bushing has been replaced by the 1911-A1 type.