Most people think our forefathers were gracious and eloquent men of class and honor -- not like the members of Congress we have today. Well, I hate to burst the bubble, but here are verbatim excerpts from the Historical Summary of Conduct Cases in the House of Representatives by the Commitee on Standards of Official Conduct:

Representative Matthew Lyon [VT][1798] "Disorderly behavior" [spat on Rep. Roger Griswold after an exchange of insults], [Jan.30,1798]; charge added of "gross indecency of language in his defense before this House" [Feb.8, 1798]

Congratulations to Gerry K. aka Krazy45cat for winning this month's contest!!! Check out his submission below. He won a new set of Happy Face grips!!!

Hello folks! As an amateur history buff, I love reading stories about the past that are not found in any of the history books when we were growing up. Stories that are so wacky and unbelievable that they're stranger than fiction. This week, I am starting a blog series I call "Strange History" where I am going to share some of these incredible stories that I dug up over the years.

I bet you haven't heard this one... Two of our former presidents were indentured servants or "debt slaves". It has been estimated that indentured servants comprised almost 80% of the total British and continental emigration to America prior to the Revolution. Like slaves, servants could be bought and sold, could not marry without the permission of their owner, were subject to physical punishment, and saw their obligation to labor enforced by the courts. But unlike slaves, servants could look forward to a release from bondage. If they survived their period of labor, servants would receive a payment known as "freedom dues" and become free members of society. Here is an excerpt I found recently...

When they were boys, future Presidents Millard Fillmore (13th President) and Andrew Johnson (17th president) were indentured servants. An indentured servant is a laborer under contract to an employer for a specified period of time, usually three to seven years, in exchange for necessities such as food, drink, clothing, transportation, and lodging. The master basically owned the indentured servant, who had hardly any rights, until the term of contract was met. Andrew Johnson was indentured to a tailor, and he ran away. The tailor placed an advertisement in the Raleigh Gazette (North Carolina), offering a reward of $10 for the capture and return of future President Johnson. Fillmore served his master, a cloth maker, for several years and was able to purchase his freedom for $30. Sometimes I wonder if we would have been better off if they stayed indentured servants.          -"Stupid American History" (2009, p.24) by Leland Gregory.

It's interesting how our society has gone a looong way since then.... or maybe not. Today, many seem to be slaves to masters that are called by a different name... credit card companies!

Fireworks on the 4th of July

I love fireworks... & I love the 4th of July! Here is a video of the fireworks display in our town I took from up a hill. Enjoy...

Happy Independence Day!!! Here are some fun facts from purpletrail.com.... 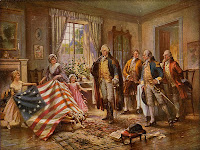 On July the 4th, 1776, the Declaration of Independence was approved by the Continental Congress. Thereafter, the 13 colonies embarked on the road to freedom as a sovereign nation. This most American of holidays is traditionally celebrated with parades, fireworks and backyard barbecues across the country. As you send out your July 4th party invitations, take a minute to think about how much you really know about what we are celebrating.

Hello folks! It's the first Friday of the month again & we're giving away another set of 1911 grips! All you have to do is watch Culerylover's video posting on youtube & post your video response... and we will pick out the winner at the end of the week. Try to make us laugh, cry, think... or whatever you want! The more entertaining the better! We will try to do this every first Friday of the month. This week you are going to win our one of our bestselling grips... the Happy Face grips!