Mosin-Nagant: To Tame the Beast… 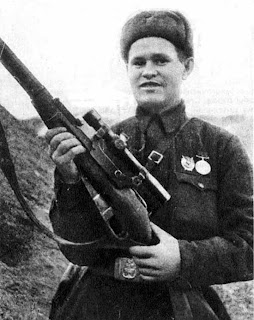 “The Mosin–Nagant (Russian: Винтовка Мосина, ISO 9: Vintovka Mosina) is a bolt-action, internal magazine-fed, military rifle invented under the government commission by Russian and Belgian inventors, and used by the armed forces of the Russian Empire, the Soviet Union and various other nations.”


A few months ago, I bought myself a Mosin-Nagant battle rifle from our local Big 5. Have you seen the movie, “Enemy at the Gates”? Yeah, it’s the very same rifle that Vasili Záitsev, the famous Russian sniper, used at the Battle of Stalingrad.

Where can you find a full-sized .30 caliber relic with such an illustrious history for less than $100? I gotta have one.

It wasn’t exactly love at first sight though. She was longish & heavy, packed full of cosmoline. She came with a long & menacing bayonet, a nice & sturdy sling, and a couple of leather-like ammo pouches of unknown material. Her bolt was straight, and it stood upright when open. How can I attach a decent scope with that sticking up like that? The wooden stock looked beaten up, but still had retained its reddish luster. I bet this rifle looked real nice during its heyday. The metal parts were actually in good shape. The bolt was made of stainless steel/alloy and surprisingly still looked clean & unblemished. The action was impressive & handled “like butter”. She shoots the celebrated 7.62x54R ammo. BTW, the "R" stands for rimmed, not Russian. The barrel was blued the old-school way. I was impressed with how the finish stood the test of time. I can say that she aged a lot better than my 11+ year-old, parkerized 1911 Kimber.

The first thing that I thought was how to transform this beast into a modern rifle, y’know, make it more tacticool. I built myself a few ARs in the past & thought this would be a fun project. After cleaning her up, I brought her to the range & tried to determine what needed fixin'. The iron sights were what you'd expect on an older Russian rifle. The rear sights were flimsy, but the hooded front sights were actually cool. This beast was heavy, but sexy-slender & had a good balance to it. It’s looong, but I didn’t want to mess with the barrel length. After I shot the first round, I suddenly realized her greatest tactical weakness… it kicked like a MULE!!!

After 50+ shots & a sore shoulder, I knew I needed to upgrade my Mosin-Nagant somehow to shoot it effectively. So when I got home, I researched on-line on what other folks did to tame this beast. I found a few excellent pointers that I wanted to share with y’all.

To improve the miserable sight picture, I bought a cheap, generic, Chinese-made 2-7x pistol scope set with mount. Make sure that whatever scope you get, that it can handle the tremendous recoil. I mounted the pistol scope on the picatinny rail mount (included) where the old rear sight used to be. You can find these scope+mount sets on amazon ($50+). You simply attach them with one replacement hex screw. For the recoil problem, I bought a gel-filled universal recoil pad, also on amazon ($15+). BTW, can you tell that I am partial to amazon? I actually like ebay too, it’s paypal that I hate with a passion… but that’s another story... 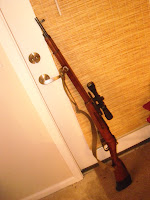 So I brought the Beast to the range the second time. (Ok by this time, I was affectionately calling her by this name.) Loaded her with a Romanian silver tip & BANG! …the recoil was apparently more manageable. Well not exactly gone, but still, not as harsh as before. I can actually shoot the rifle the entire day now. The scope & mount performed well too. With loctite, they didn't come loose or anything. I can shoot 3” groups at 50 yards after zeroing her with a laser bore-sighter. Not bad for a historic relic! My goal is to shoot sub-2” groups with a little more practice. I wasn’t able to shoot a hundred yards that time due to time constraints (my wife called & asked me to buy milk). With these improvements, the Beast is now one of my favorite rifles to bring to the range!

You can’t lose in investing on one of these. When the SHFT or when the zombies attack, for less than $200 for the rifle+ammo, you’ll have all that you need to defend your turf and your loved ones!

We are now available on amazon.
Back to our 1911 Custom Killer Grips.