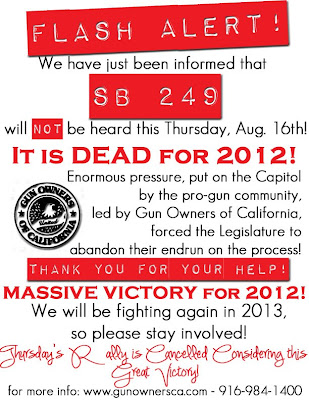 
A friend forwarded this interesting video... Please watch, it might save your life some day!

SAN CARLOS, CA, AND MADERA, CA – In an egregious and deliberate move to ban hundreds of thousands of legal firearms and harm law-abiding California gun owners, California Senator Leland Yee (D-San Francisco) has amended his bill SB 249 to make possession of all Bullet Button, or “maglocked”, firearms a criminal act as of July 1, 2013.  Sen. Yee’s chief-of-staff, Adam Keigwin, has said that California should ban all guns, even bolt-action hunting rifles.

Explaining his support for the gun ban, Senator Steinberg told the Sacramento Bee that “no one will convince me it's anything other than a joke to say that having multiple clips and semi-automatic weapons that can shoot 100 or more bullets at a time is necessary in this state or in this country. It’s ridiculous."

SB 249, if it were to become law, would categorically ban all “maglocked” semi-automatic firearms that are in common use, such as those which use the Bullet Button device.  SB 249 does not provide for any grandfathering of existing firearms nor does it have a method of compensating gun owners for the firearms the proposed law would require to be destroyed or removed from California.  The net effect would be what is perhaps the single largest unconstitutional government taking in California history.

More, SB 249 would subject gun owners to criminal liability as of July 1, 2013, for the mere possession of firearms that Senator Yee and Attorney General Harris have both said are legal under current law.  Ex post facto laws, such as SB 249 would create if passed, are expressly unconstitutional.

Interestingly, however, SB 249 would create a de facto requirement that gun owners , hunters, and competitors in California use only “featureless” firearms, such as AR and AK-style guns employing compliance parts like the Solar Tactical KYDEX Grip Wraps, MonsterMan Grips, or Exile Machine’s Hammerhead Grip, which not only allow for the lawful use of factory magazine releases but large-capacity magazines as well.  California does not ban the possession of large-capacity magazines.  Wes Morris, owner of Ten Percent Firearms, demonstrates this is an excellent YouTube video you can view at http://www.youtube.com/watch?v=qhC8LpHPbRQ.

Senator Yee’s bill is currently before the Assembly Appropriations Committee and is expected to be heard on August 15, though it could be heard as soon as August 8.  The bill must pass both the Assembly and the Senate by August 31.

The Calguns Foundation and Cal-FFL, through their pathbreaking grassroots initiative platform StopSB249.org, have created many free, easy-to-use tools for you to help combat this massive gun ban.  Please forward this message to your friends, family, favorite gun dealers and manufacturers, and your social networks, like Facebook and Twitter.  Working together, we can Stop SB 249 - but we need you to TAKE ACTION NOW!

Donate to The Calguns Foundation and help Stop SB 249.

Stop SB 249's Take Action page with many free tools to fight SB 249 can be found at http://stopsb249.org/take-action.

Website banners with html code are avalable at http://stopsb249.org/get-banners-for-your-website.

The Calguns Foundation (www.calgunsfoundation.org) is a 501(c)3 non-profit organization which serves its members by providing Second Amendment-related education, strategic litigation, and the defense of innocent California gun owners from improper or malicious prosecution. The Calguns Foundation seeks to inform government and protect the rights of individuals to acquire, own, and lawfully use firearms in California.

California Association of Federal Firearms Licensees (www.calffl.org) is California's premier non-profit industry association of, by, and for firearms manufacturers, dealers, collectors, training professionals, shooting ranges, and others, advancing the interests of its members and the general public through strategic litigation, legislative efforts, and education. For more information or to join Cal-FFL, please visit calffl.org.

Found this very informative video on zeroing concepts for your AR-15...