Check out the latest youtube review of our bestselling grips...

I've always wanted to know what was the origin of this super-commercialized holiday & I found this excerpt on-line... Have a wonderful Valentine's Day!!! 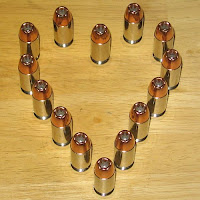 In Ancient Rome, February 14th was a holiday to honor Juno, Queen of the Roman Gods and Goddesses. The Feast of Lupercalia started the next day.

During these times boys and girls were segregated. However, the young people had a custom that began on the eve of the Festival of Lupercalia. The girl’s names were written on pieces of paper and inserted into jars. Each boy then drew a girl’s name from the jar and they were partners throughout the Festival. After being paired, the children would often continue to see each other throughout the year and on occasion even fell in love and got married.

Emperor Claudius II of Rome, also known as Claudius the Cruel was having a difficult time recruiting men as soldiers. He believed that the men did not want to leave their sweethearts and cancelled all engagements and marriages throughout Rome. St. Valentine, a priest of Rome at the time, secretly married couples. He was eventually caught, arrested and condemned. He was beaten to death and beheaded on February 14th, around the year 270.

Lupercalia was a feast to a heathen God. Pastors and priests of the early Christian church did away with the pagan custom by replacing the names of the girls with the names of saints. They chose St. Valentine’s Day as the day of celebration for the new feast.

Valentine Day greetings became popular during the middles ages. During that time period, lovers sang or spoke their sentiments. Paper and written Valentines became popular at the end of the 15th Century. The oldest Valentine that exists today was made during this era and is on display in the British Museum.

In early years Valentine cards were handmade. Rebus Valentines had verses in which tiny pictures took the place of some of the words. Fraktur Valentines had ornamental lettering in the style of illuminated manuscripts of the Middle Ages. Cutout Valentines were made by folding a piece of paper several times and cutting out a lacey pattern with small, pointed scissors. A Puzzle Purse Valentine was a folded puzzle, which was read and refolded. Among the numerous folds were written lines and verses that had to be read in a certain order to be understood. Using a stencil cut from oilpaper and painting through the stencil made Theoren Valentines. These Valentines originated in the Orient. Pinprick Valentines were made to look like lace by pricking tiny holes in paper with a needle or pin. I well remember receiving one of these from my grandmother many years ago.

During the 1800’s Valentines began to be manufactured in factories. In the beginning they were handpainted by the workers and came only in black and white similar to silhouettes. Fancy Valentines of the day were made of ribbon and lace. Paper lace was not introduced until the mid 1800’s. By the end of the 19th Century, Valentines were made by machine. Handmade cards became very rare.

Norcross, today known as Hallmark, began to manufacture Valentine Day cards in the early 1900’s. Each year, Hallmark displays a collection of antique Valentines in its stores. Rare cards are also displayed in museums and libraries around the world during late January and throughout February. If you have a chance to take in one of these displays, be sure to do so. You will not regret your decision.

During the 19th and 20th Centuries, postcards with Valentine greetings were produced. They came in categories of humor, romantic and friendship. I have numerous Valentine cards in my postcard collection – all magnificent specimens of a bygone era.

Oh by the way... on Valentine's Day, give your loved one what he or she really likes.... a new set of Custom Killer Grips! :)

Gun Facts: Does Availability of Guns Cause Crimes?

This is the first of a series of blogs that will touch on something sensitive to a lot of gun-aficionados like myself... it's the topic of Gun Control. I found an interesting document from www.gunfacts.info called, "Gun Facts - Your Guide to Debunking Gun Control Myths". On it are "facts" collected by a group of advocates, headed by Mr. Guy Smith, a self-proclaimed Civil Libertarian. In his Introduction, he stated the purpose of this document...


The goal of Gun Facts is to provide a quick reference guide for civil libertarians on gun control issues. Use Gun Facts when composing arguments for debates, writing letters to editors, emailing to your representatives, and sending statements to the media. The problem Gun Facts addresses is the lack of intellectual honesty by gun control advocates. Over many decades they have presented “information” to the media and the public that is at best inaccurate and at worst fraudulent. Gun Facts is dedicated to debunking gun control myths and providing citable evidence. Common gun control myths are listed in the pages that follow. For each myth, one or more facts are presented to refute the gun control claim and the source of the information is fully cited.

The document talked about a lot of things from assault weapons to accidental deaths. It showed "statistics" that debunked common myths about guns. I will start this series with a question that most of us want to know....

"Does Availability of Guns Cause Crimes?"
Here is what the document says... 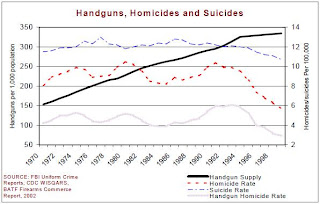 Fact: Though the number of firearms owned by private citizens has been increasing steadily since 1970, the overall rate of homicides and suicides has not risen. As the chart shows, there is no correlation between the availability of firearms and the rates of homicide and suicide in America.

source: Targeting Guns: Firearms and Their Control, Gary Kleck, Aldine de Gruyter, 1997. (Ownership tables derived from the annual “General Social Survey.”)
Fact: The most significant correlation between the use of guns in the commission of crimes occur when parents (27.5% of inmates) abuse drugs or have friends engaged in illegal activities (32.5% with robberies and 24.3% for drug trafficking).

source: Firearm Use by Offenders, Bureau of Justice Statistics, November 2001
Fact: Five out of six gun-possessing felons obtained handguns from the secondary market and by theft, and “[the] criminal handgun market is overwhelmingly dominated by informal transactions and theft as mechanisms of supply.”

source: The Armed Criminal in America: A Survey of Incarcerated Felons , James D. Wright, Peter H. Rossi, National Institute of Justice (U.S.), 1985
Fact: The majority of handguns in the possession of criminals are stolen, and not necessarily by the criminals in question. 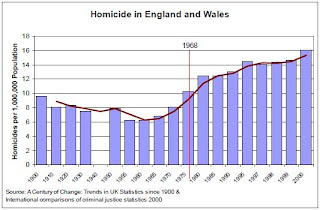 Fact: In 1968, the U.K. passed laws that reduced the number of licensed firearm owners, and thus reduced firearm availability. U.K. homicide rates have steadily risen since then. Ironically, firearm use in crimes has doubled in the decade after the U.K. banned handguns.

sources: A Century of Change: Trends in UK Statistics since 1900, Hicks, Joe; Allen, Grahame (SGS), Social and General Statistics Section, House of Commons; and Weapons sell for just £50 as suspects and victims grow ever younger, The Times, August 24, 2007
Fact: Most violent crime is caused by a small minority of repeat offenders. One California study found that 3.8% of a group of males born in 1956 were responsible for 55.5% of all serious felonies. 75-80% of murder arrestees have prior arrests for a violent (including non-fatal) felony or burglary. On average they have about four felony arrests and one felony conviction.

source: The Prevalence and Incidence of Arrest Among Adult Males in California, Robert Tillman, prepared for California Department of Justice, Bureau of Criminal Statistics and Special Services, Sacramento, California, 1987

source: Felony Defendants in Large Urban Counties, 1998, Brian Reaves, U.S. Department of Justice, Office of Justice Programs, Bureau of Justice Statistics, November 2001
Thoughts from the author: Criminals are not motivated by guns. They are motivated by opportunity. Attempts to reduce public access to firearms provide criminals more points of opportunity. It is little wonder that high-crime cities also tend to be those with the most restrictive gun control laws – which criminals tend to ignore.

As someone who took a post-grad course in designing & implementing surveys, I know how important surveys are. I also know how easy it is to manipulate them to your needs. When confronted with data like this, try to think critically & please take these "facts" as simply interesting read... not as bible-truth!