Since y'all like trivia so much, here is another collection on the unlucky bird that we eat on this auspicious event. Enjoy!

Benjamin Franklin argued that the turkey, and not the bald eagle, should be the national symbol of America. He claimed that the “vain and silly” turkey was a far better choice than the bald eagle, which he thought was a “coward.”

Even though they are generally seen as large and ungainly, turkeys:
• Can fly up to 55 MPH over short distances
• Run up to 25 MPH on the ground
• Have excellent hearing but no ears
• Have a poor sense of smell
• Can see in color
• Have a 270 degree field of vision, making them difficult to sneak up on
• Sometimes sleep in trees

Over 45 million turkeys are prepared and eaten in the United States for Thanksgiving each year.

The five most popular ways to eat the leftover turkey from Thanksgiving includes: soups or stews, sandwiches, casseroles, stir-fries and salads.

Age does matter. Older male turkeys are generally considered to be tastier than young males (stringy) or females (tough).

Only male “Tom” turkeys gobble, and they can be heard a mile away; the females only cluck or click.

The “Turkey Trot” dance was named after the short, jerky steps that turkeys make.

The Native Americans called turkeys “firkees,” which some believe to be the origin of the word. However, when turkeys are spooked they make a “turk turk turk” sound, which is where the name likely originates.

Turkeys may “gobble gobble” in English, but in Portuguese they say “Gluglu gluglu.”

A tribute to all the veterans out there...
Thank you for your sacrifice and service!!!

I give special discounts to current & former Law Enforcement & Military personnel as tribute of my appreciation. Send me an email.

The Springfield 1911 is one of the best guns in the world. I know, because I have a TRP & it's one of the most accurate handguns I've ever shot. But have you heard that the current Springfield company is not the legendary Springfield Arsenal that George Washington helped establish?

According to my exhaustive research (a few minutes on the web), in 1776, Henry Knox, Chief of Artillery for the Continental Army, passed through Springfield, MA on his way to deliver heavy cannons captured at Fort Ticonderoga to General George Washington for use in the siege of Boston.  During his short visit, Knox was impressed with the town’s strategic location for America’s War for Independence.  A year later, Springfield became the location for the principal arsenal for the northern states during the war.  The site was used for everything from the assembly and repair of small arms, to the manufacture of wagons, saddles, fuses and cartridges, as well as a storehouse for powder and other instruments of war.  Eleven years later, in 1794, the National Armory at Springfield was established by President George Washington. 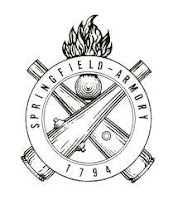 For the next 192 years, the Springfield Arsenal would be the birthplace of such famous weapons like the 1903 Springfield and the M1 Garand, as well as machinery like the Blanchard Lathe which allowed for faster production of wooden stocks.  However, in 1968, amid controversy, Secretary of Defense Robert McNamara closed the armory that was established by our country’s first President.  Not another firearm would ever come from its hallowed halls, and none have come forth since.
That same year, Elmer C. Balance registered the trademark “Springfield Armory” for his new company that made civilian versions of the venerable M14 in San Antonio, TX.  Shortly thereafter, he sold his company to the Reese family.  The new owners expanded the line into handguns, particularly the M1911 with tremendous success.  The company was eventually moved to Genesco, IL where it resides today.  It has no association or connection to the original Springfield Armory other than the name.
Although their M1A rifles are manufactured at the Illinois facility, all of Springfield Armory’s handguns are all manufactured by different companies in other countries according to Springfield Armory’s high standards.  Their M1911 derivative pistols are manufactured by IMBEL in Brazil, and the XD series pistols are Springfield Armory stamped HS2000’s manufactured in Croatia.  Springfield Armory also boasts on of the finest 1911 custom shops on the planet.
So, when Springfield Armory says that they’re “The First Name in American Firearms” ...that is true.  But what’s in a name?  In this case it’s history, tradition, and good old American ingenuity.  Fortunately, Springfield, Inc. seems to be continuing that tradition just fine.
Don’t you think?