Chris Kyle & The Punisher Symbol: the Myth, the Legend & their Influence on Pop Culture 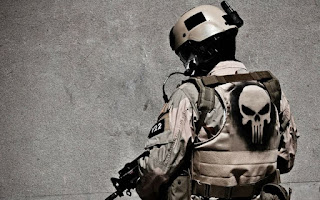 The Punisher was originally a Marvel Comics character created by writer Gerry Conway. Initially, the Punisher was meant to be a villain, an antagonist to Spiderman …but not a typical villain. Instead, the Punisher is a vigilante, relentless in killing bad guys, putting him at odds with the morally upright Spiderman. The Punisher’s secret identity is Frank Castle, a Marine Corps veteran with Special Forces training whose family has been killed by mobsters after witnessing a mafia execution in New York’s Central Park.

Originally created in the 1970s, the Punisher has gained popularity among military personnel, evidenced by the distinctive four-fanged skull artwork generated within the military. Most notably, former Navy SEAL Chris Kyle, known through his autobiography, "American Sniper", and movie adaptation, utilized the Punisher symbol. He also became known as "The Legend" among the general infantry and Marines he was tasked to protect. Kyle’s Navy SEAL unit called themselves “the punishers” and marked their gear as well as Iraqi buildings with the symbol. In an excerpt from Kyle’s autobiography, he states, “we spray-painted it on our Hummers and body armor, and our helmets and all our guns. We spray-painted it on every building or wall we could, we wanted people to know, we’re here and we want to f**k with you.” There have been connections made between Chris Kyle and the Punisher, as both are portrayed as men who pursued the course they believe is right and do not deviate from it. However, Kyle was never portrayed as a ruthless killer unlike the original Punisher.

The movie has garnered a lot of attention within the American public, and with it the symbol of the Punisher. The popularity of the iconic symbol among Chris Kyle and other military personnel have altered the myth that the character was meant to convey in its inception. Kyle bridged the gap between myth and reality. The character of Frank Castle as the Punisher was not meant to be a good guy, he was a violent man with seemingly no morality. Through the popular adoption of the Punisher symbol among military personnel, the Punisher has become the good guy, the guy who rights wrongs and doesn’t second-guess himself. 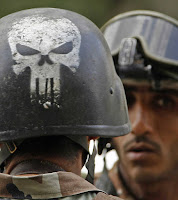 The Punisher began as a second tier Marvel anti-hero. However, through the depiction of the Punisher in Chris Kyle’s autobiography, "American Sniper", the role of the Punisher has become that of a full-fledged hero.

Did I mention that we do have 1911 punisher grips available on our website? :) Check them out. 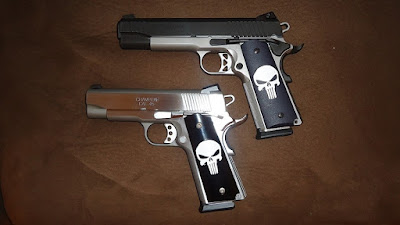